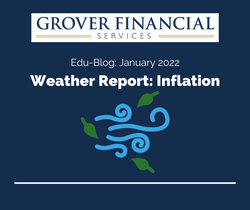 Inflation: Why You Own Equities

It is no doubt that inflation is back, and it has been intimidating to many investors. Rather than run for the hills, I strongly encourage you to listen to the wise advice of financial advisors out there (like me, of course): own equities.

Let me be clear before we start this conversation. Equities alone are not the heroic hedge against inflation that we’ve all been looking to find. No financial asset is. But they are something to set your sights on when the rocky road of rising prices makes you feel unsafe.

Let’s be honest. None of us know how long this inflation spike will last. We do know that headline inflation is at a 30 year high - that’s hard to forget. We also know that interest rates have remained controlled, and gold is no higher than it was last year. If interest rates and gold prices changed erratically, those would be red flags worth recognizing. Since they are not, let’s focus on something to compare the economy to so that we can get a better picture of what we are dealing with and how perilous it really is. I have just the thing. Let’s talk about 1990.

The last time inflation ran at an annual rate of six percent for 12 months, as it is now, was in 1990. Of course, 1990 was not far off from 1970, when stagflation caused an entire nation to suffer, struggle, and subsequently remember that year in vivid detail for decades. So, when 1990 rolled around, the horror of the ’70s was hot on people’s minds. In 2021, inflation is intimidating us once again. So, let’s compare ourselves to the year ‘90 and see what we get.

To summarize, mainstream equities are up fourteen times in value, cash income from mainstream equities are up five times, while the cost of living is only up by merely double. Again, equities are not the ultimate hedge against inflation, but they are a hedge - and a pretty good one. But why have dividends gone up so much? Part of that answer was in last week's blog, which talked about innovation as a deflation tactic. Since 1990, we’ve seen a surge in the toys, tools, and technology I mentioned before, increasing our productivity and expanding our global markets. In general, mainstream equities are an inflation hedge supported by history. They’ve worked over and over again in times like these. Of course, that is not to say they will always work or work perfectly, but they are a decent way to protect your pennies in the long term.

Next week, we’ll continue our inside scoop on inflation. Again, we will use history to hone in on reasons why worrying about inflation will only give you insomnia, not solutions. Until next time…