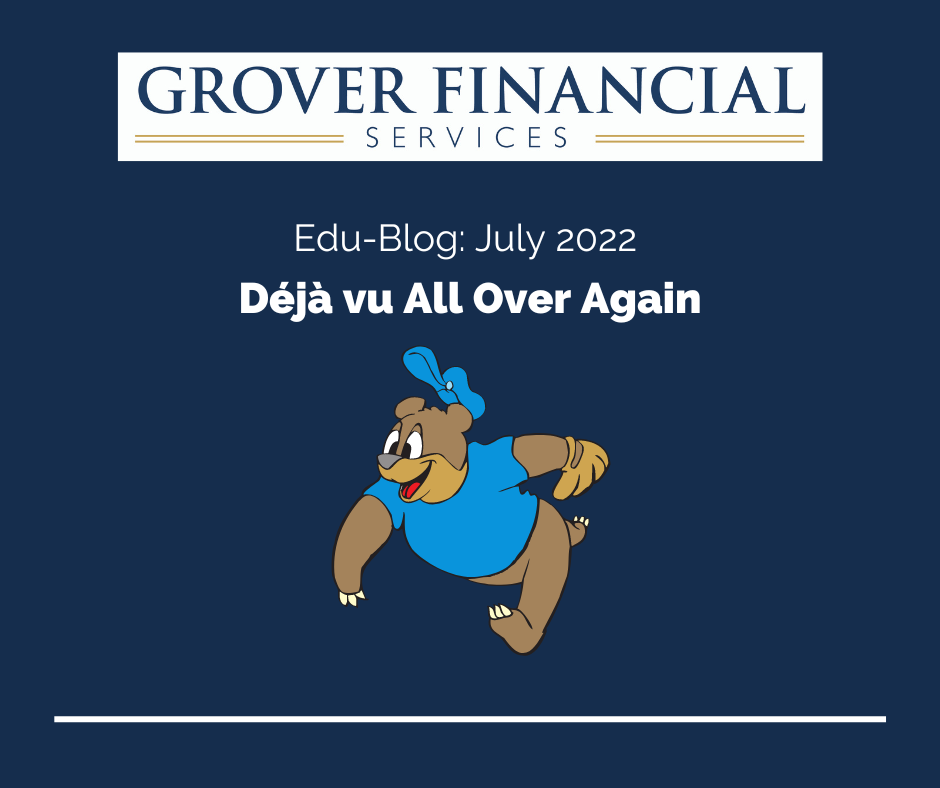 Déjà Vu All Over Again - Part 1

The current market environment may have many of us remembering one of Yogi Berra's famous quotes, "It feels like déjà vu all over again." But make no mistake, the bear is back. A bear market, as you may recall, is a drop of 20% or more from a recent peak. In this case, the “recent peak” was all the way back on January 3rd of this year. Having helped clients navigate – and even take advantage of – several bear markets in my career, I’ve found that looking solely at that 20% number can paint a picture of pure chaos in the markets. But not all bear markets are the same. Some are long, some are short. Some come with economic recessions and others don’t. Some catch investors completely unawares, while others come on more gradually. For this reason, it’s better to focus on the reasons behind the number rather than the number itself, and that is just what we will be doing in this month's Edu-blog series. Because when we concentrate on the cause instead of just the effect, suddenly a bear market doesn’t seem so abstract or bewildering.

Breaking Down the Bear
This current bear market is not a surprise. It’s the result of a slow, gradual market decline that’s been going on since the start of the year, all driven by one thing: Inflation. In fact, the NASDAQ has actually been in a bear market since March, and the S&P 500 threatened to tip over last month before recovering somewhat after the Federal Reserve raised interest rates by a half-point. (More on this in a moment.) The hope was that this step – the first of its kind since the year 2000 – would start slowing inflation’s rise. Unfortunately, a half-point was not enough. On Friday, June 10, a new Consumer Price Index report showed that inflation rose even higher in May, to the tune of 8.6%.1 That’s the biggest increase since 1981. In essence, the Fed’s half-point rate hike was like sticking your finger in a leaky dam when the water is threatening to spill over the top anyway. This means the Federal Reserve now has a choice: Raise interest rates more aggressively and risk triggering a recession or continue on the same measured path and risk worsening inflation. (To clarify, this has been the Fed’s choice for months; it’s just that now, the pressure to get it right is even greater.) Both approaches come with short-term pain for the markets, which is why Friday’s news was the tipping point for a bear market.

On the one hand, higher interest rates are a proven tool for fighting inflation. Higher interest rates reward saving over spending. If Americans spend less, demand for goods and services goes down, forcing companies to lower their prices if they’re to attract new business. Lower prices, of course, mean lower inflation. On the other hand, higher rates mean higher borrowing costs and more expenses for both individuals and companies. If rates rise too high, too fast, it could trigger nationwide layoffs, a crash in housing prices, and more. Still, many economists expect the Fed to announce even larger rate hikes soon, both because of inflation and because the economy may be able to handle it. After all, if you remove inflation from the equation, the economy is actually in pretty good shape. The unemployment rate is at 3.6%, which is almost back to where we were in January 2020 before COVID hit.2 And consumer spending – the bedrock of our economy – remains strong. It was to shore up the economy that the Fed dropped interest rates in the first place. Now, the thinking goes, that mission is complete, which means it’s time for the Fed to pivot to the second prong of their “dual mandate”: stabilizing prices. (The first prong is stable employment.)

The Fed meets this week to discuss its next move, and the markets will have more clarity after that about what the immediate future holds. What kind of price movement will that clarity prompt? Frankly, you could make arguments for almost any result. If the Fed announces bolder action, that could help reassure investors and pull the markets out of bear territory. But this is a fluid situation. Depending on how the Fed words its guidance, coupled with any other economic developments that may happen this week, it’s possible the bear takes an even bigger bite out of stock prices.

This is why we need to be prepared for either result – both mentally and emotionally. Because the headlines – or rather, how we react to them – will play a big role in determining how well we navigate these turbulent times. You see, news of a bear market is an unpleasant headline in a year that’s been full
of them. But in my experience, the real danger during market conditions like these is not the bear itself, but the way people respond to it. Because, when you think about it, headlines are written to seem big, grand, even epic. They’re designed to get your attention. What they are not designed to do is give advice specific to you. So, let’s talk about what a bear market does and does not mean for your investments, your financial plan, and your financial goals.

What a Bear Market Means
Have you ever been driving on the road and hit every green light on the way to your destination? It’s a great feeling, isn’t it? Well, that’s sort of what a bull market is – and the road is the journey to your financial goals. A bear market is the opposite. During a bear market, the road to your financial goals, for the foreseeable future, is like getting caught at every red light in a major traffic jam. We’re still progressing toward your goals, but we’re inching instead of cruising. Sometimes, we may not move at all for a while. Sometimes, it may be necessary to take a detour and backtrack. It’s not fun, but it’s also not the end of the world. Because here’s what a bear market doesn’t mean:

Have you ever been caught in rush hour traffic, and the lane you’re in just won’t budge? Meanwhile, the lane next to you seems to be moving just fine. So, as soon as you see an opening, you merge into that lane – only to immediately slam on your brakes. Now the new lane is backed up! So, you try again…until you find yourself in the very lane that’s closed off and causing a traffic jam in the first place. This is what emotional, undisciplined investors do during bear markets. They start frantically trying to change lanes, get off the road, or even abandon the car altogether. As a result, they burn fuel, waste time, and end up making the situation worse – because they aren’t where they need to be when the road gets cleared and the traffic speeds up again. They aren’t there when the bear market inevitably ends, and a new bull is born.

You see, history doesn’t show us how long a bear market will last. Until now, we’ve had three bear markets in the 21st century. The first, in the early 2000s, lasted 929 days. The second, amidst the Great Recession, lasted 517. But the third, back in early 2020, lasted only 33.3 What history does show us is that bear markets are always temporary. The markets always recover – and the recovery can be a generational chance to get in the next bull market on the ground floor. Warren Buffett once said, “The stock market is a device to transfer money from the impatient to the patient.” If we can remember this; if we can remember what a bear market means and does not mean, we can not only weather this volatility…but turn it to our advantage in the long run.

One last thought, I believe an educated investor is an empowered investor. If you like what you’ve read and think your friends and family can benefit as well, please share.

The opinions voiced in this material are for general information only and are not intended to provide specific advice or recommendations for any individual. All performance referenced is historical and is no guarantee of future results. All indices are unmanaged and may not be invested into directly.

All investing involves risk including loss of principal. No strategy assures success or protects against loss. There is no guarantee that a diversified portfolio will enhance overall returns or outperform a non-diversified portfolio. Diversification does not protect against market risk.